A couple of years ago, I had this nutty idea that I could master French cookery within a few short months. Or, at least enough to pass an exam called the CAP de Cuisine. Students who pursue a career in the culinary arts in lieu of the traditional route culminating in a high school diploma followed by college must pass the CAP before embarking on their careers in the kitchen. In preparation for the CAP de Cuisine exam, students enroll in a 2-year program that equips them with food industry skills, such as French culinary techniques, the science of ingredients, kitchen and restaurant management, and food safety.

The CAP de Cuisine exam is also open to independent candidates who did not go to culinary school, such as those who would like to change careers. Though I had no intention of pursuing a career in the kitchen, I thought it would be a worthwhile challenge to learn how to cook like the French do and to sharpen my culinary chops. So, I signed up to take the exam. Part of my exam preparation consisted of learning basic cooking techniques and mastering the classic French dishes from Cuisine de Référence, which is the quintessential teaching/reference book for French cuisine.

As eager as I was to master all of the French classics, I simply didn’t have enough time to consecrate to this rather ambitious goal. The exam actually consists of multiple components that test more than just a candidate’s culinary expertise. Candidates must demonstrate their culinary prowess on a written test and prepare several dishes during a live practicum. Additionally, they must also have a certain level of proficiency in standard academic subjects, such as math, history, geography, etc.

Although I’ve indefinitely tabled my pursuit of a French culinary diploma, I did pick up a few essential kitchen skills as I cooked my way through the culinary reference book. I had started the exam prep by learning how to make the different types of French pastry dough, such as pâte brisée, pâte sablée and pâte feuilletée. Pâte brisée (shortcrust pastry dough) is often used to make quiches, while pâte sablée contains much more sugar and serves as the base of fruity tarts. Pâte feuilletée, which is a puff pastry used to make things like croissants, requires a bit more effort because the dough must be rolled and folded multiple times. The technique yields a puff pastry with many paper-thin layers characteristic of a well-made artisan croissant.

Unlike the pâte feuilletée, making a pâte brisée is a breeze. The dough itself actually only takes about 5 minutes to make, but it must rest in the fridge for at least an hour. This resting period is important because it prevents the dough from shrinking when baked. Once I saw how easy it is to whip up a pâte brisée, I’ve never gone back to using store-bought ones. When I make my own dough, my quiches always have a more pronounced butter flavor and a superior crunchy texture.

The ease and versatility of quiches make for a delicious Sunday afternoon lunch or a light weeknight meal. You can add virtually any combination of ingredients you like to them. For this quiche, I roasted bell peppers and combined them with feta cheese and sautéed leeks. I had never roasted bell peppers before and I feel as though I’ve totally been missing out! You just toss them into the oven until the skin chars, and once cooled, the skin peels off with little effort. Roasting the peppers brings out their sweetness, which complements the savoriness of the feta and sautéed leeks. Paired with a simple green salad, this roasted pepper and leek quiche will certainly satisfy just about any appetite! 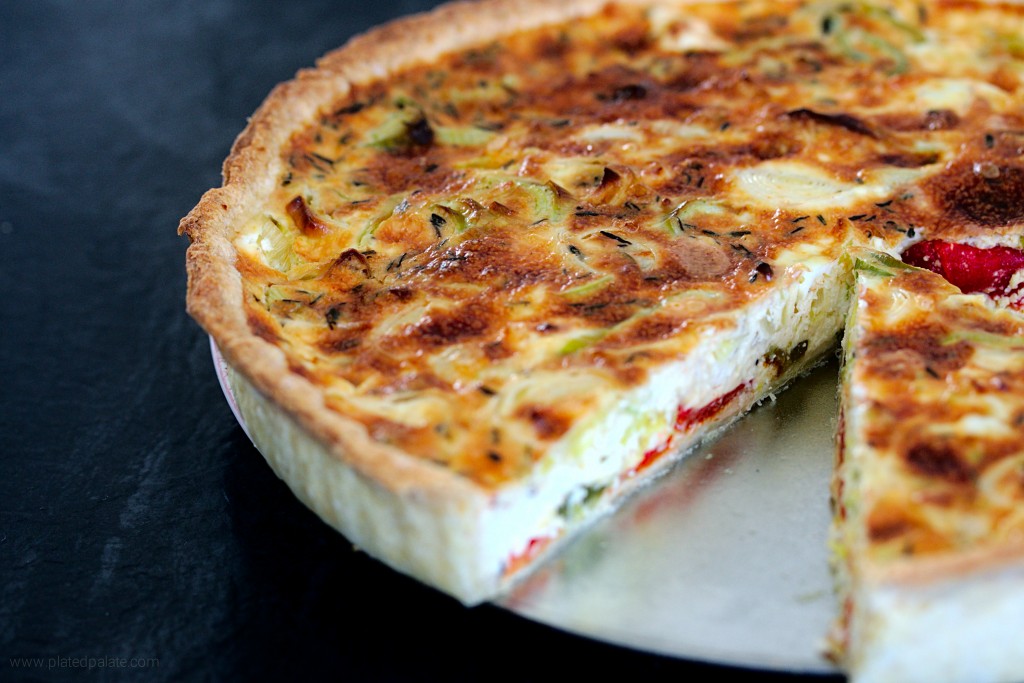 The ease and versatility of quiches make for a delicious Sunday afternoon lunch or a light weeknight meal. You can add virtually any combination of ingredients you like to them. For this quiche, roasting bell peppers brings out their sweetness, which complements the savoriness of the feta and sautéed leeks. Paired with a simple green salad, this roasted bell pepper and leek quiche will certainly satisfy just about any appetite!
Prep Time 30 mins
Cook Time 1 hr

*Julia Child’s Mastering the Art of French Cooking has a fantastic illustrated section demonstrating how to properly roll pastry dough and how to press it into a quiche pan.
Course: Main Course, Side Dish
Cuisine: French
Keyword: Bell Peppers, leeks, Pâte Brisée, Quiche